We stock a comprehensive range of both synthetic and natural thyroids.

We advocate taking a natural supplement over a synthetic because products such as Armour Thyroid contain a full spectrum of Thyroid hormones (T1, T2, T3 and T4) unlike synthetic thyroid products such as Titre or Tiromel, which typically only contain one.

We also have the first synthetic T3 and T4 combination IBSA from Italy.

Due to the current COVID-19 situation we are currently operating as usual, although we are operating with home working for customer service and operations teams and our depot dispatch teams are operating social distancing as per government guidelines. Please note that there may be some delays/disruptions in answering customer queries on the phone and email. In the first instance, please email us your queries and we will respond as quickly as we can. We are still making every effort to ship orders as efficiently as we can, however there are some delays being experienced with couriers, but please bear with us if you experience any delays in the above as your products are on their way to you.  Thank you for understanding.

The principal pharmacologic effect of exogenous thyroid hormones is to increase the metabolic rate of body tissues.

Triiodothyronine (T3) level is low in the fetus and newborn, in old age, in chronic caloric deprivation, hepatic cirrhosis, renal failure, surgical stress, and chronic illnesses representing what has been called the “low triiodothyronine syndrome.”

Animal studies have shown that T4 is only partially absorbed from the gastrointestinal tract. The degree of absorption is dependent on the vehicle used for its administration and by the character of the intestinal contents, the intestinal flora, including plasma protein, soluble dietary factors, all of which bind thyroid and thereby make it unavailable for diffusion. Only 41% is absorbed when given in a gelatin capsule as opposed to a 74 percent absorption when given with an albumin carrier.

Depending on other factors, absorption has varied from 48 to 79% of the administered dose.

Fasting increases absorption. Malabsorption syndromes, as well as dietary factors (children’s soybean formula, concomitant use of anionic exchange resins such as cholestyramine), cause excessive fecal loss. T3 is almost totally absorbed, (95% in 4 hours). The hormones contained in the natural preparations are absorbed in a manner similar to the synthetic hormones.

More than 99% of circulating hormones are bound to serum proteins, including thyroid-binding globulin (TBg), thyroid-binding prealbumin (TBPA), and albumin (TBa), whose capacities and affinities vary for the hormones. The higher affinity of levothyroxine (T4) for both TBg and TBPA as compared to triiodothyronine (T3) partially explains the higher serum levels and longer half-life of the former hormone. Both protein-bound hormones exist in reverse equilibrium with minute amounts of free hormone, the latter accounting for the metabolic activity.

Deiodination of levothyroxine (T4) occurs at a number of sites, including liver, kidney, and other tissues. The conjugated hormone, in the form of glucuronide or sulfate, is found in the bile and gut where it may complete an enterohepatic circulation. Eighty-five percent of levothyroxine (T4) metabolized daily is deiodinated.

INDICATIONS AND CLINICAL USE

Thyroid hormone preparations are generally contraindicated in patients with diagnosed, but as yet uncorrected, adrenal cortical insufficiency, untreated thyrotoxicosis, and apparent hypersensitivity to any of their active or extraneous constituents. There is no well documented evidence from the literature, however, of true allergic or idiosyncratic reactions to thyroid hormone.

Drugs with thyroid hormone activity, alone or together with other therapeutic agents, have been used for the treatment of obesity. In euthyroid patients, doses within the range of daily hormonal requirements are ineffective for weight reduction. Larger doses may produce serious or even life-threatening manifestations of toxicity, particularly when given in association with sympathomimetic amines such as those used for their anorectic effects.

The use of thyroid hormones in the therapy of obesity, alone or combined with other drugs, is not justified and has been shown to be ineffective. Neither is their use justified for the treatment of male or female infertility unless this condition is accompanied by hypothyroidism.

General: Thyroid hormones should be used with great caution in a number of circumstances where the integrity of the cardiovascular system, particularly the coronary arteries, is suspect.

These include patients with angina pectoris, hypertension, other cardiac conditions, or the elderly, in whom there is a greater likelihood of occult cardiac disease. In these patients, therapy should be initiated with low doses, i.e., 25 to 50 μg levothyroxine (T4) or its isocaloric equivalent (16 to 32 mg, or 0.25 to 0.5 grain of desiccated thyroid). When, in such patients, a euthyroid state can only be reached at the expense of an aggravation of the cardiovascular disease, thyroid hormone dosage should be reduced. Thyroid hormone therapy in patients with concomitant diabetes mellitus or insipidus or adrenal cortical insufficiency aggravates the intensity of their symptoms.

Hypothyroidism decreases and hyperthyroidism increases the sensitivity to oral anticoagulants. Prothrombin time should be closely monitored in thyroid-treated patients on oral anticoagulants and dosage of the latter agents adjusted on the basis of frequent prothrombin time determination. In infants, excessive doses of thyroid hormone preparations may produce craniosynostosis.

INFORMATION FOR THE PATIENT

Patients on thyroid hormone preparations and parents of children on thyroid therapy should be informed that:

When the total serum T4 is low but TSH is normal, a test specific to assess unbound (free) T4 levels is warranted. Specific measurements of T4 and T3 by competitive protein binding or radioimmunoassay are not influenced by blood levels or organic or inorganic iodine and have essentially replaced older tests of thyroid hormone measurements, i.e., PBI, BEI, and T4 by column.

Insulin or Oral Hypoglycemics: Initiating thyroid replacement therapy may cause increases in insulin or oral hypoglycemic requirements. The effects seen are poorly understood and depend upon a variety of factors such as dosage and type of thyroid preparations and endocrine status of the patient. Patients receiving insulin or oral hypoglycemics should be closely watched during initiation of thyroid replacement therapy.

Estrogen, Oral Contraceptives: Estrogens tend to increase serum thyroxine-binding globulin (TBg). In a patient with a nonfunctioning thyroid gland who is receiving thyroid replacement therapy, free levothyroxine may be decreased when estrogens are started thus increasing thyroid requirements. However, if the patient’s thyroid gland has sufficient function, the decreased free thyroxine will result in a compensatory increase in thyroxine output by the thyroid. Therefore, patients without a functioning thyroid gland who are on thyroid replacement therapy may need to increase their thyroid dose if estrogens or estrogen-containing oral contraceptives are given.

The following drugs or moieties are known to interfere with laboratory tests performed in patients on thyroid hormone therapy: androgens, corticosteroids,

Changes in TBg concentration should be taken into consideration in the interpretation of T4 and T3 values. In such cases, the unbound (free) hormone should be measured. Pregnancy, estrogens, and estrogen-containing oral contraceptives increase TBg concentrations. TBg may also be increased during infectious hepatitis. Decreases in TBg concentrations are observed in nephrosis, acromegaly, and after androgen or corticosteroid therapy. Familial hyper or hypothyroxine-binding-globulinemias have been described. The incidence of TBg deficiency approximates 1 in 9 000. The binding of thyroxine by TBPA is inhibited by salicylates.

Medicinal or dietary iodine interferes with all in vivo tests of radioiodine uptake, producing low uptakes which may not be reflective of a true decrease in hormone synthesis.

The persistence of clinical and laboratory evidence of hypothyroidism in spite of adequate dosage replacement indicates poor patient compliance, poor absorption, excessive fecal loss, or inactivity of the preparation. Intracellular resistance to thyroid hormone is quite rare.

Carcinogenesis, Mutagenesis, and Impairment of Fertility: No confirmatory long-term studies in animals have been performed to evaluate carcinogenic potential, mutagenicity, or impairment of fertility in either males or females. A reportedly apparent association between prolonged thyroid therapy and breast cancer has not been confirmed and patients on thyroid for established indications should not discontinue therapy.

Thyroid hormones do not readily cross the placental barrier. The clinical experience to date does not indicate any adverse effect on fetuses when the thyroid hormones are administered to pregnant women. On the basis of current knowledge, thyroid replacement therapy to hypothyroid women should be continued during pregnancy. However, the physician should be aware that pregnancy increases TBg concentrations (see Drug/Laboratory Test Interactions).

Minimal amounts of thyroid hormones are excreted in human milk. Thyroid is not associated with serious adverse reactions and does not have a known tumorigenic potential. However, caution should be exercised when thyroid is administered to a nursing mother.

Children: Pregnant mothers provide little or no thyroid hormone to the fetus. The incidence of congenital hypothyroidism is relatively high (1:4 000) and the hypothyroid fetus would not derive any benefit from the small amounts of hormone crossing the placental barrier. Routine determinations of serum (T4) and/or TSH are strongly advised in neonates in view of the deleterious effects of thyroid deficiency on growth and development.

Treatment should be initiated immediately upon diagnosis and maintained for life, unless transient hypothyroidism is suspected. In this case, therapy may be interrupted for 2 to 8 weeks after the age of 3 years to reassess the condition. Cessation of therapy is justified in patients who have maintained a normal TSH during those 2 to 8 weeks.

Except in rare instances of intolerance, possibly due to the development of hypersensitivity to animal protein in whole thyroid, adverse effects are generally infrequent at physiologic doses.

SYMPTOMS AND TREATMENT OF OVERDOSAGE

Signs and symptoms of excessive doses of thyroid hormone result in a hypermetabolic state resembling in every respect the condition of endogenous origin. The condition may be self-induced.

Dosage should be reduced or therapy temporarily discontinued if signs and symptoms of overdosage appear. Treatment may be reinstituted at a lower dosage. In normal individuals, normal hypothalamic-pituitary-thyroid axis function is restored in 6 to 8 weeks after thyroid suppression.

Treatment of acute massive thyroid hormone overdosage is aimed at reducing gastrointestinal absorption of the drugs and counteracting central and peripheral effects, mainly those of increased sympathetic activity. Vomiting may be induced initially if further gastrointestinal absorption can reasonably be prevented and barring contraindications such as coma, convulsions, or loss of the gag reflex. Treatment is symptomatic and supportive. Oxygen may be administered and ventilation maintained. Cardiac glycosides may be indicated if congestive heart failure develops. Measures to control fever, hypoglycemia, or fluid loss should be instituted if needed.

Antiadrenergic agents, particularly propranolol, have been used advantageously in the treatment of increased sympathetic activity. Propranolol may be administered i.v. at a dosage of 1 to 3 mg over a 10-minute period or orally, 80 to 160 mg/day initially, especially when no contraindications exist for its use. Other adjunctive measures include administration of cholestyramine to interfere with thyroxine absorption, and/or the administration of glucocorticoids to partially inhibit conversion of T4 to T3.

The dosage of thyroid hormones is determined by the indication and must in every case be individualized according to patient response and laboratory findings. There are wide variations in individual responses.

The effects of daily thyroid reach a therapeutic maximum usually in 4 to 6 weeks. Initial dose for myxedema is usually 30 to 180 mg daily; other hypothyroid states, 60 to 300 mg daily. Usual maintenance dose is 30 to 125 mg daily.

Pediatric Dosage: Pediatric dosage should follow the recommendations summarized in Table I. In infants with congenital hypothyroidism, therapy with full doses should be instituted as soon as the diagnosis has been made.

Instructions for Use: Table II lists the approximate equivalents of other thyroid preparations, when changing medication from desiccated thyroid, T4 (levothyroxine sodium), or T3 (liothyronine sodium). 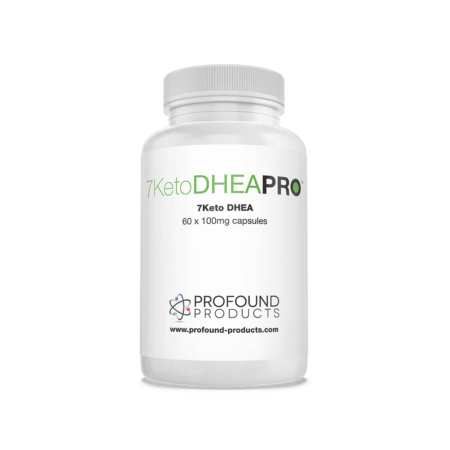 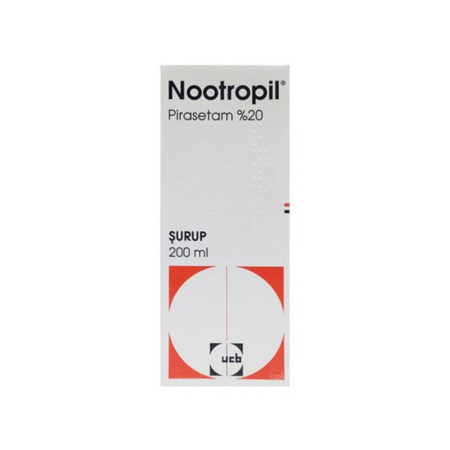 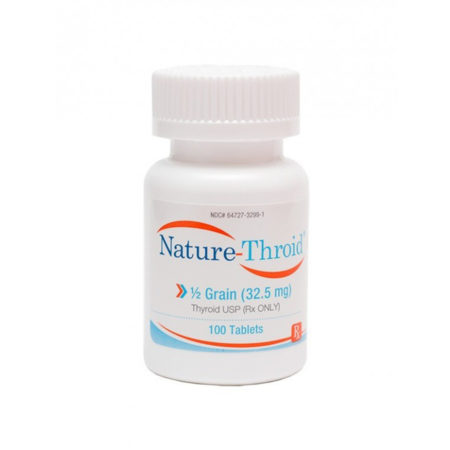 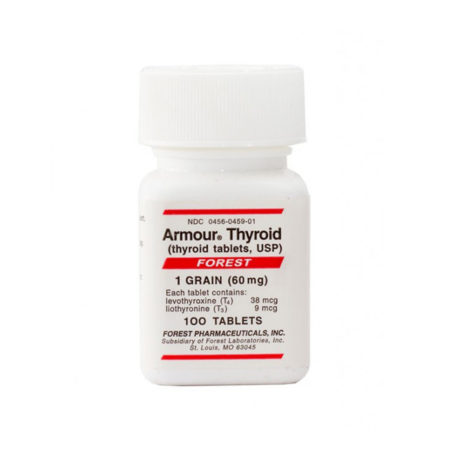 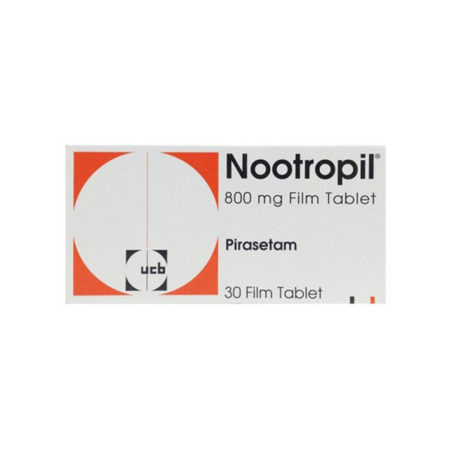 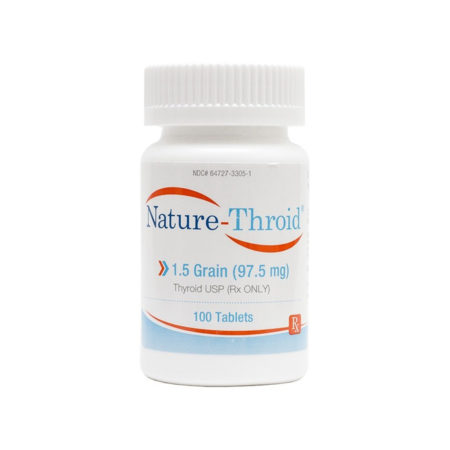 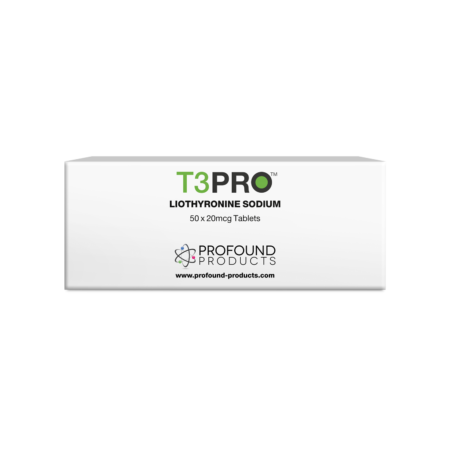 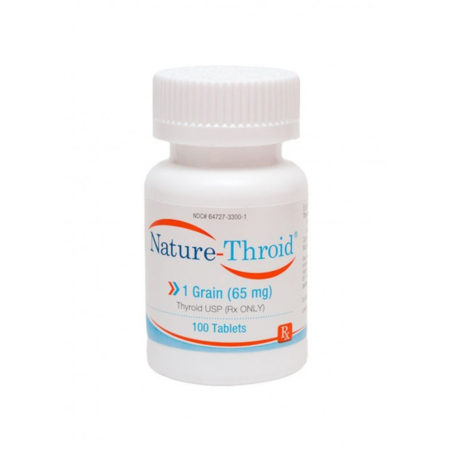 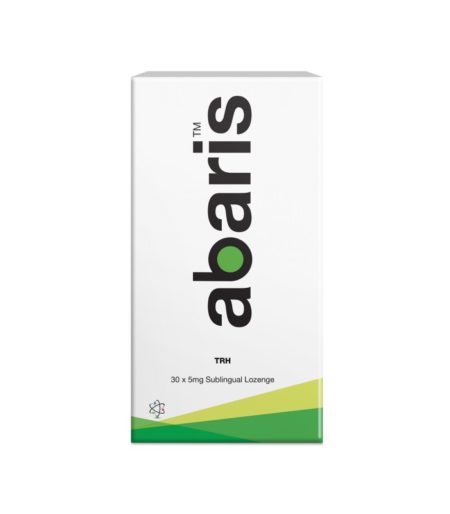 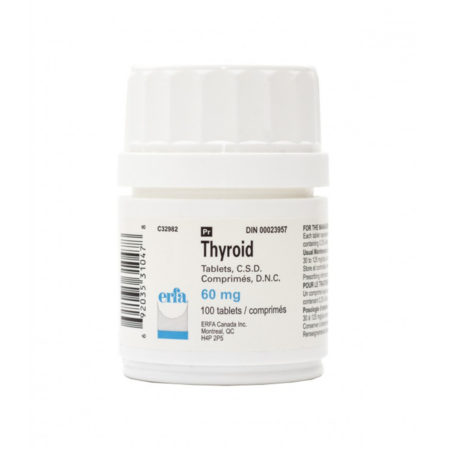 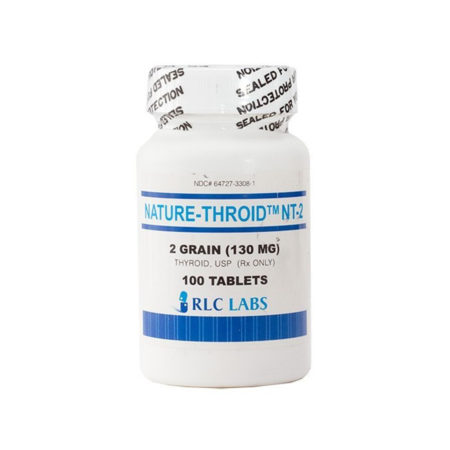